There's a saying that goes:  "Misery loves company" and while we hope that any project you'd do with us wouldn't be classified as misery, we thought that we could help with the "company" part of that equation by sharing a renovation project with you in real time.  The is WIP (Work in Progress), and for the next few weeks we'll looking at a project in Ridge Meadows.

The interesting thing about this project is that we've been here before.  Paradigm did the first kitchen renovation for this client back in 2000.  At the time it was quite an extensive remodel, but 10 years and 2 (additional) children later the space didn't quite meet their needs any more.  What was needed was more room for the family, and the guests they entertain.
The new kitchen design is an even bigger departure from the original kitchen than the first renovation.  In fact it's almost 180 degrees different since the entire kitchen is switching places with the dining room.  This means all the services have to move to the other side of a very large room!  In addition we're also removing a wall to make the new dining room even larger, and we're making the access into the living room a little wider.

This is our original renovation just after it was completed back in 2000 ... and the site of the new dining room.  The wall behind the refrigerator is the wall we're removing, which will add another 48" to the room.  All the cabinetry you see in the room has found a new home, something we try to do for every old kitchen we remove.

Here's the room now.  The black pipe you see on the right is a drain stack from the upstairs bathroom.  We knew it was there before we took out the wall, but our hope was that we were going to be able to relocate it.  However, until the drywall came off and we looked at things close up we couldn't be 100% certain we could do it.  This is a very important thing to remember when you renovate.  Plan ahead whenever possible, and when you can't you have to choose between making a design decision on the fly, or anticipating a "worst case scenario".

For us, the worst case was not being able to remove the wall.  Would the design be possible even if the wall couldn't be removed?  For us it was and we were able to proceed without waiting.  But if it hadn't been we would have been forced to do some pre-design demolition, or to wait until the phase we're at now.  Of course the sooner you can be certain the better, but sometimes it's just not possible.

This is the wall that used to house a pantry, desk area and wall oven.  In the new design it will be home to the fridge, microwave and a long run of pot and pan drawers.  Directly opposite this wall will be the new island and the 48" professional style range.

This is the same wall now.  We've furred out the wall to even it up from some previous framing.  You'll notice another black drain pipe to the right of the ducts.  This was relocated from it's original home on the opposite side of the room something we were able to do since we'd added some extra depth to the new wall.  We are fortunate that this kitchen also has a crawl space beneath, making the majority of the mechanical (plumbing, electrical, heating) work much simpler.

This is where the new kitchen will be.  Cabinetry and countertops will run beneath all 3 windows providing a very large work surface.  The sink will be situated beneath the middle window and the aforementioned island and range will be in the middle of this space.

Something else of note in these pictures are the pot lights in the ceiling.  Whenever we are involved with a complete renovation like this, we work out a lighting plan to go with the layout of the kitchen.  However, until the ceiling is explosed we have no idea if what we have planned will actually work with the framing in the room.  In this case, the lighting plan worked about 75% from what we had planned.  The designer and the electrician met on the job site to discuss the required changes.  These changes were then discussed with the client to be sure they met everyone's expectations.

Coming up next:  drywall, floor prep and cabinets!

Links to other entries in the WIP series on the Ridge Meadows Reno: 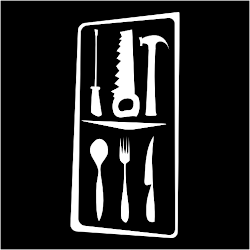 Paradigm Kitchens is a full service design firm located in Vancouver, BC. In business since 1995, we work closely with our clients to create kitchen and bathroom projects that reflect their needs and tastes. Contact Us.